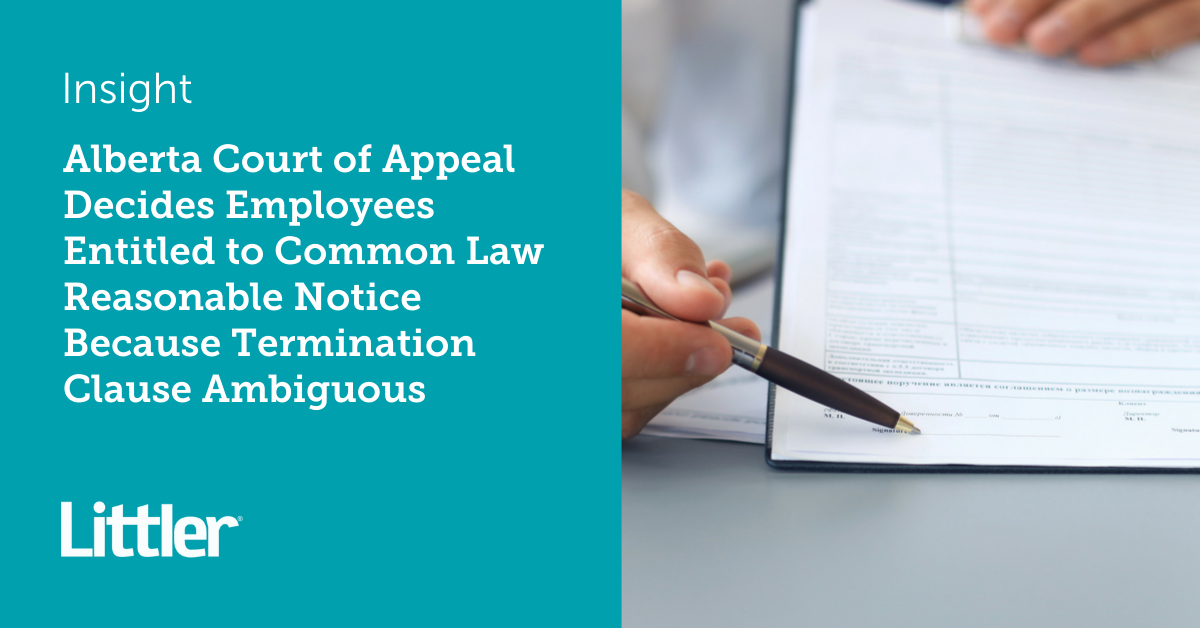 In Bryant vs. Parkland School Division2022 ABCA 220the Alberta Court of Appeal (ABCA) allowed an appeal from a summary dismissal by the Alberta Court of Queen’s Bench (ABQB) in Bryant vs. Parkland School Division2021 ABQB 391. The ABQB dismissed a request for reasonable notice under common law brought by three employees because it concluded that the termination clause of the standard employment contracts, which entitled them to “a written notice of sixty (60) days or more”, was not ambiguous. In allowing the appeal, the ABCA concluded that the termination clause was ambiguous. The ABCA referred the matter to the ABQB for determination of common law reasonable notice, if the parties could not agree.

When their employment was terminated with 60 days’ notice, the employees sued for reasonable notice at common law.

The trial court held that the words “or more” did not render the termination clause ambiguous “simply because an employee is unable to determine the period of notice in excess of 60 days that he may receive “. The court said that on its face, the clause provided for a fixed 60-day notice and allowed the employer to give more notice at its discretion. The ABQB concluded that the clause clearly and unequivocally set out a period of notice and dismissed the common law reasonable notice claim.

The ABCA disagreed with the lower court. Citing court precedents, the court noted that different principles apply to the interpretation of employment contracts from other commercial contracts due to the power imbalance and unequal bargaining power inherent in the employment relationship. work, and the limited ability of employees to negotiate contract terms. The ABCA also noted that the courts have repeatedly recognized the importance of work and the manner in which employment is terminated to an individual’s life and well-being.

The ABCA then referred to the following principles of interpretation which have evolved in case law on employee protection:

The ABCA said the lower court failed to properly apply these principles in its analysis and that if it did, it would be clear that the termination clause did not unambiguously limit the right to reasonable notice in clearly setting out the right to notice. With the inclusion of the words “or more”, there was no upper limit to the amount of notice an employee was entitled to receive; 60 days was not the maximum notice because the termination clause explicitly provided that an employee could be entitled to longer notice.

The ABCA agreed with the lower court’s observation that “if the contract contained only the words ’60 days’, it would be quite clear that [the employer] had set his notice at 60 days. She called those terms “clear and unambiguous,” but noted that the clause contained no such language.

The ABCA called the lower court’s finding that the employer gave itself discretion to decide the amount of notice owed a “questionable finding” and said that had it been intended, the employer could have written the contract accordingly. The ABCA concluded that a more reasonable interpretation “is that the employer intended the notice period to be in accordance with common law standards, subject to a minimum notice period of 60 days”. The court’s main finding was that the clause was not sufficiently clear, unequivocal and unambiguous to remove or limit the presumptive common law right to reasonable notice. The ABCA pointed out that “[t]the reading most favorable to the employee must prevail.

The decision in Park is another example of the importance for employers to review their employment contracts to ensure that they comply with applicable employment standards law and the principles of interpretation that have evolved in case law.

Employers who intend to include termination clauses in their employment contracts should consider language that unambiguously limits or removes the common law right to reasonable notice. Such wording should also preserve all legal minimum rights.