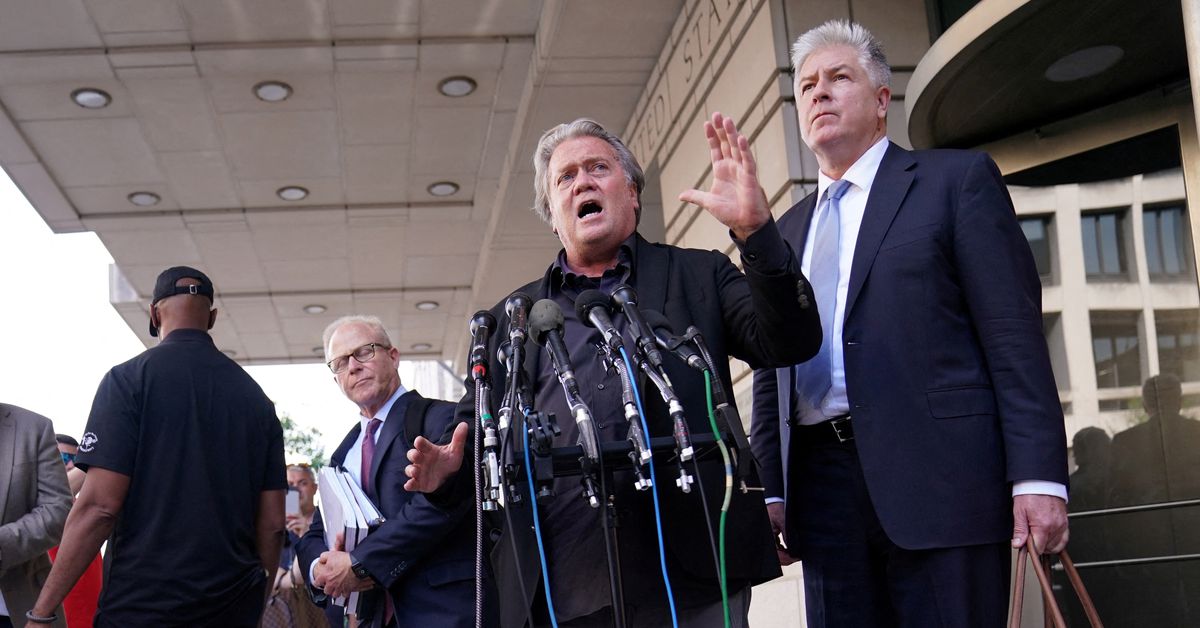 Ex-Trump adviser Bannon felt he was ‘above the law’, prosecution told jury

WASHINGTON, July 19 (Reuters) – A federal prosecutor told jurors in Steve Bannon’s criminal trial on Tuesday that Donald Trump’s prominent former presidential adviser decided he was “above the law” by defying a subpoena. to appear from the congressional committee investigating last year’s attack on the United States Capitol.

The prosecution and defense made opening statements after jury selection at the trial, with the first government witness testifying. Evan Corcoran, an attorney for Bannon, said in his opening statement that Bannon did not ignore the subpoena and in fact entered into the committee thinking he would negotiate with his attorney and that his deadlines” weren’t fixed – they were flexible.”

Bannon, 68, has pleaded not guilty to two counts of contempt of Congress after refusing to provide testimony or documents to the Democratic-led House Select Committee last year. Read more

The subpoena issued last September, prosecutor Amanda Vaughn told jurors, “was not optional. It was not a request. And it was not an invitation. It was required.”

“The defendant decided he was above the law,” Vaughn added. “That’s why we are here today.”

Vaughn said the committee had reason to believe Bannon may have information about the events leading up to the Jan. 6, 2021 riot. Trump supporters stormed the Capitol and attacked police in an effort unsuccessful in blocking official congressional certification of his 2020 election loss to Democrat Joe Biden.

Bannon “didn’t get stuck on a broken down subway car,” Vaughn said of the defendant’s refusal to comply with the subpoena, referring to the Washington-area subway system. Instead, the case is about “the defendant thumbing his nose” at normal government process, Vaughn added.

Corcoran said committee staff and attorneys for proposed witnesses almost always negotiate — and witnesses often appear at a later date than specified in a subpoena.

Former Trump White House chief strategist Steve Bannon speaks to members of the press, alongside attorneys Matthew Evan Corcoran and David Schoen, as he walks away on day two of the contempt trial of contempt of Congress arising from its refusal to cooperate with the United States. House Select Committee investigating the January 6, 2021 attack on the Capitol, outside the U.S. District Court in Washington, U.S., July 19, 2022. REUTERS/Sarah Silbiger

“Absolutely,” replied Amerling. “The Select Committee is considering a violent attack on the United States Capitol, on law enforcement, on our democratic institutions. We have limited time.”

Amerling said the committee’s authority expires at the end of 2022.

Explaining the panel’s interest in hearing from Bannon, Amerling noted that he had told a podcast the day before the riot that “all hell is going to break loose tomorrow” and that the committee wanted to know if he had a prior knowledge of the attack.

Nichols previously ruled that Bannon could not claim he failed to comply with the subpoena because he believed his documents and testimony were protected by a legal doctrine called executive privilege that can keep certain presidential communications confidential. .

The judge also barred Bannon from telling jurors that he relied on the advice of his attorney, who told him there were valid legal reasons why he could not respond to the subpoena.

Corcoran told jurors that Bannon, after being subpoenaed, sought advice from an attorney, Robert Costello, who later raised objections with the committee, including whether the requested information was privileged. executive. Corcoran said those objections are “no excuse” for not complying, but the fact that Bannon’s attorney directly engaged the committee showed that the defendant did not deliberately ignore the subpoena.

Bannon changed course this month and said he wanted to testify before a public committee hearing, nearly 10 months after defying the subpoena. There is no indication that he is considering doing so, as the committee would likely want him to testify in camera first to cover a wide range of issues. Trump told Bannon he waived any claims of executive privilege.

“You’ll also see the excuse the defendant gave for not complying. You’ll see he claimed something called privilege,” Vaughn told the jury.

Reporting by Sarah N. Lynch; Editing by Will Dunham and Scott Malone

Umar Khalid’s lawyer does not plead on the basis of the law: the prosecution