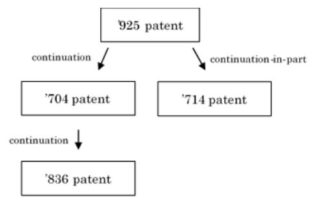 In Rodriguez v. Fed. Deposit Ins. Society., 140 S. Ct. 713 (2020), the Court ruled that federal courts cannot create their own judicial rules unless it is “necessary to protect only federal interests”.

THE QUESTION PRESENTED IS:

Did the federal circuit violate Rodriguez when he invoked his own federal rule of common law, replacing state contract law, to assert that a patent license – a license that does not expressly grant a license for a particular patent – nonetheless implicitly licenses this patent simply because it is the continuation of an expressly authorized patent, without considering whether this federal common law rule was necessary to protect only federal interests?

In an earlier lawsuit, Cheetah claimed a family member patent – the ‘714 patent – against Fujitsu. (See table above). This case ended with a license to Fujitsu which included the ‘714 patent and also

“All parents, provisionals, substitutes, renewals, continuations, continuations in part, divisionaries, foreign counterparts, reissue, oppositions, continuing examinations, re-examinations and extensions of the patents in question … whether they are filed before, on or after the [License] Effective date.”

In his petition here, the patentee argues that the federal circuit should not – as it has done here – create and extend an interpretation of federal common law patent licensing contracts. On the contrary, the license contract should be interpreted as if it were a contract (which it is) according to state law like any other contract: