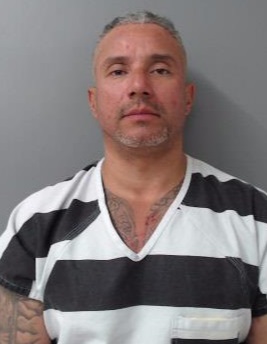 A man has been behind bars for allegedly assaulting his common-law wife and their child.

Eduardo Garza, 44, has been charged with injuring a child, interfering with an emergency call and assault, domestic violence.

Laredo Police responded to a domestic disturbance at approximately 6:55 a.m. on July 8 in the 100 block of Alicante Drive. First officers on the scene observed Garza standing in the driveway of the residence.

When the police entered the house, a 26-year-old woman and a 3-year-old girl came out of a room. An officer noticed that the child had wounds on the left side of his face with blood. Police would find that Garza hit the child with a can, according to court documents.

An investigation found that Garza arrived home intoxicated, the arrest affidavit states. Garza entered the bedroom where the woman and her daughter were sleeping. Garza allegedly asked him who was in their house. She told Garza that a friend of hers knocked on the door asking for Garza. She told him Garza wasn’t home.

Garza then got angry because she hadn’t told him sooner about her friend. Garza started throwing things. She then covered herself with a blanket to protect her daughter. When she tried to call the police, Garza snatched the phone from her and broke it, according to court documents.

She then ran to the front door with her daughter in an attempt to leave. But Garza had several locks that did not allow him to leave, according to the affidavit.

When the woman tried to flee through the kitchen window, Garza grabbed her by the hair and pulled her back into the room. She managed to call the police when she took the child to the toilet. When police asked the child what happened, they said “Papi” hit her with a can, according to court documents.