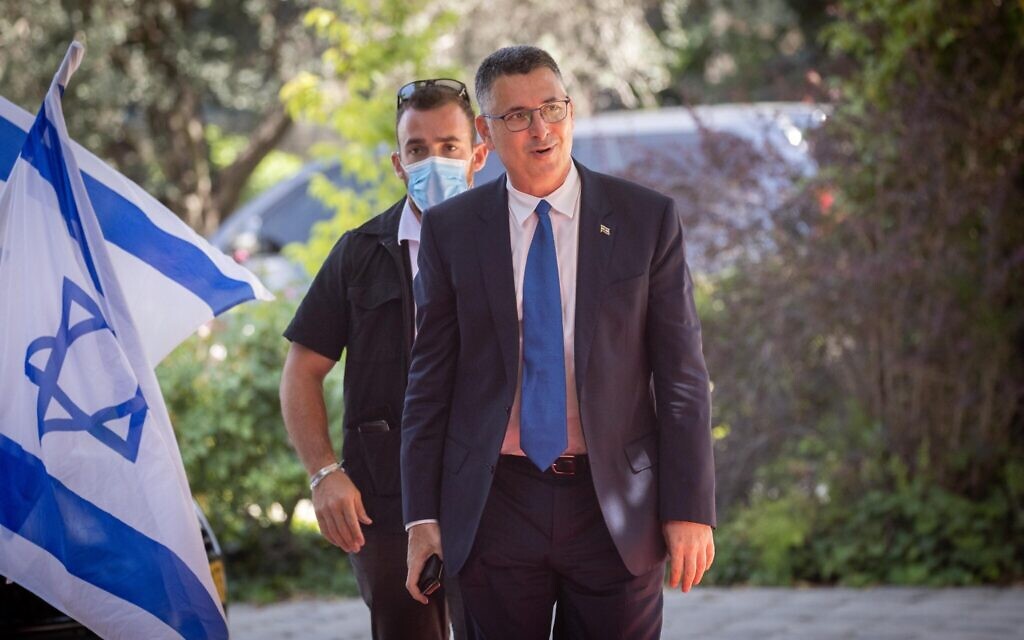 Sa’ar denies talks with Likud, but says vote to renew civil law for settlers must pass

Justice Minister Gideon Sa’ar on Wednesday denied “fake news” that his New Hope party was in talks with the opposition Likud to form an alternative coalition in the current Knesset.

“There were no negotiations, there are no negotiations and if I thought I would change my position, which I don’t, then I would go openly in front of the public and explain why I changed his mind,” said Sa’ar, a longtime Likud. -MK who left the party and created his own faction due to his opposition to the continued leadership of President Benjamin Netanyahu.

Sa’ar made this claim in an interview with Channel 12, but he pushed the same message in interviews with the other major news broadcasters – public broadcaster Kan and Channe 13 – and all three aired on the hour. great listening.

The media blitz came hours after the Ynet news site reported that Sa’ar was in contact with Netanyahu associate Yaakov Atrakchi. The report said that amid the talks, Likud ordered a reduction in public attacks on Sa’ar.

Unnamed sources, with knowledge of the affair, said Sa’ar would be offered a high-level portfolio in a potential Netanyahu-led government, such as the Foreign Ministry.

Recalling that before previous elections he said he would not join a government with Netanyahu, and asked to explicitly repeat that commitment, Sa’ar told Channel 12, ‘my position has not changed’ .

He refused three times to explicitly repeat that he would not sit with Netanyahu, but then criticized the opposition leader for refusing to back legislation extending Israeli civil and criminal law to settlers in the West Bank.

Saar said that if the bill is not passed, Israeli settlers will be subject to the same military legal system as Palestinians, which he described as a disastrous outcome. Under the bill, Palestinians remain subject to a separate military justice system.

“For his personal interest, Netanyahu is campaigning against a fundamental national interest of the State of Israel,” Sa’ar said.

Clearly, Netanyahu has not changed, Sa’ar said, and “so my position [against sitting with him in government] hasn’t changed either…and I don’t see any circumstances in which that would be the case.

He used the television interviews to explain his party’s stance in favor of the bill extending civil rights to settlers in the West Bank and his warning earlier this week that the coalition would not survive if it failed to pass the legislation.

Anonymous coalition members speaking to Channel 12 slammed Sa’ar for what they described as threats, saying his strategy made it harder for Islamist Ra’am and leftist Meretz to support civil law measure.

Sa’ar told Channel 12 that whoever aimed the criticism at him was a coward for hiding behind anonymity and taking his own shot at his coalition partners for not fully backing the measure, which , in his view, would create enormous legal headaches.

“We must do our utmost to avoid unnecessary elections,” he continued, and this coalition “is the least bad option – we fought for it – but that’s if it is able to govern”.

Earlier Wednesday, Meretz MK Michal Rozin said her party would support the bill, which posed the final test for the fragile coalition.

Rozin said his faction’s support is based on coalition agreements not to make major changes to the status quo regarding the Palestinians, a key part of the pact that holds the disparate government together.

The ruling left Ra’am as the only apparent holdout against the bill within the coalition. While the Kan public broadcaster reported that Ra’am chairman Mansour Abbas would support him, it was unclear whether the rest of the party would support him. If they didn’t, rebel Meretz MP Ghaida Renawie Zoabi – who announced her resignation from the coalition last month only to return a few days later – was unlikely to vote for the bill either, said said Kan.

Meanwhile, the TV channel reported lingering tensions during a meeting called by Prime Minister Naftali Bennett with other party leaders from the ruling coalition made up of factions of left, center, right and Arabs on Wednesday morning.

Sources said Saar was “irritable” at the meeting, warning that it is not possible to maintain a government when each party in the coalition does what it wants. Foreign Secretary Yair Lapid then reportedly confronted Saar, saying, “The question is how do you handle this, and do you want to fix it or break it? [the government] a part?”

Coalition leaders are reportedly intrigued by Saar’s stance on the issue, believing differences between them can be resolved.

Supporting The Times of Israel is not a transaction for an online service, like subscribing to Netflix. The ToI Community is for people like you who care about a common good: to ensure that balanced and responsible coverage of Israel continues to be freely available to millions of people around the world.

Of course, we’ll remove all ads from your page and you’ll have access to great community-only content. But your support gives you something deeper than that: the pride of joining something that really matters.

Join the Times of Israel community Join our community Already a member? Log in to stop seeing this

So now we have a request. Unlike other media, we don’t have a paywall in place. But since the journalism we do is expensive, we invite readers to whom The Times of Israel has become important to support our work by joining The Times of Israel community.

For just $6 a month, you can help support our quality journalism while benefiting from The Times of Israel WITHOUT ADVERTISINGas well as access Exclusive content only available to members of the Times of Israel community.

Meretz to back civil rights bill for settlers, but tensions within coalition reportedly persist