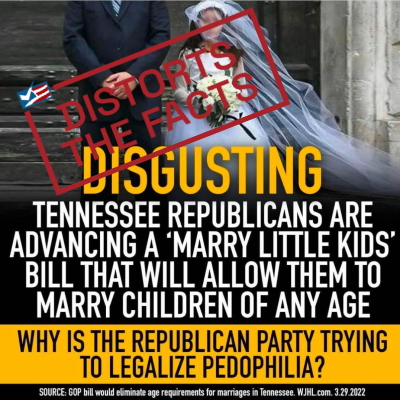 A Tennessee bill seeks to exclude same-sex couples from proposed common law marriage contracts. Social media posts falsely claim that the bill would allow child marriage and “legalize pedophilia”. The bill initially omitted a minimum age, but was amended on April 6 to say that individuals must be at least 18 years old.

Republican Rep. Tom Leatherwood introduced House Bill 233 to a Tennessee House subcommittee in early March. the invoice would allow a man and a woman to file marriage “contracts” based on common law principles that are not yet legally recognized in Tennessee. Same-sex couples would not be eligible for contracts.

The law project sparked a backlash in the state and throughout the country, as it did not include an age requirement for those who wanted such a marriage contract.

Sponsors amended the bill April 6 to say that candidates for the contract – which he specifies as “a man” and “a woman” – must have “has reached the age of majority”, which is 18 in Tennessee.

But social media posts continue to misrepresent the bill, claiming it has no minimum age and was intended to facilitate child marriages.

A Facebook post April 7 from the liberal advocacy group Occupy Democrats misleadingly states: “Republicans in Tennessee are proposing a ‘marry grandchildren’ bill that will allow them to marry children of any age. Why is the Republican Party trying to legalize pedophilia? The post garnered more than 3,600 reactions.

The post attributes its claim to a March 29 story by Tennessee news station WJHL. However, the day before the Occupy Democrats post, WJHL reported, “Common-Law Marriage Bill Amended to Add Age Requirement While Still Under Consideration.”

A similar misleading claim was posted on Facebook on April 6 by a page managed by Left action that we call trump sucks.

But as we said, the omission of a minimum age was rectified the same day this Facebook page posted about it.

“AChanging or addressing age at marriage was never the intent of this bill. …It’s a better bill by putting [the age minimum] in there,” Leatherwood said, according to the tennessian.

According to WUSA 9the bill is due to be heard by the Tennessee House Civil Justice Committee on April 13.

Editor’s Note: FactCheck.org is one of many organizations work with facebook to debunk misinformation shared on social media. Our previous stories can be found here. Facebook has no control over our editorial content.