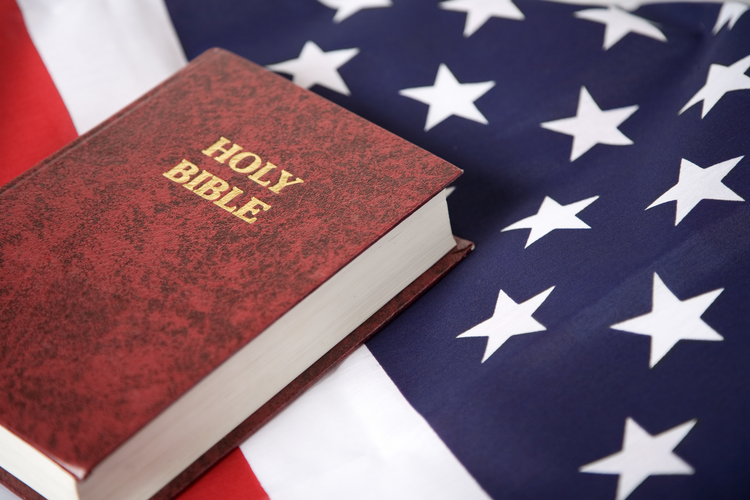 What do we do when the requirements of civil law conflict with divine commandments?

Kim Davis’ beliefs, like so many religious thoughts in the United States, are a mishmash of American civil religion, the Bible, the Constitution, and the invocation of freedom. One of the quotes that looms large in the Bible in claiming religious freedom for Christians is found in Acts 5. Peter and John were arrested and imprisoned on the Temple Mount for preaching in the name of Jesus. Miraculously released from prison, they continue to teach in the name of Jesus. When they are again arrested, they appear before the council again:

So the captain went with the temple police and brought them in, but without violence, for they were afraid of being stoned by the people. When they had brought them, they made them present themselves before the council. The high priest questioned them, saying, â€œWe have given you strict command not to teach in this name, but here you have filled Jerusalem with your teaching and you are determined to bring this man’s blood upon us. But Peter and the apostles replied, â€œWe are to obey God rather than any human authorityâ€ (Acts 5: 26-29).

This has been an important question since the origins of Christianity: what to do when the demands of civil law conflict with what is meant by divine commandments or prerogatives?

The depth of Kim Davis’ beliefs can ultimately only be judged by God and her, but his willingness to flout civil law in order to uphold his religious beliefs has a long and noble history in Christianity. We would all agree, for example, that the laws instituting slavery were bad and that those who fought against those laws were on the side of the angels, even when those laws had the strength and support of government and civil law.

The big difference between Kim Davis and many predecessors in these battles, including the early Christians and including Peter and John in Acts 5, is that they were not responsible for enforcing government laws. Kim Davis is an elected member of government and it is his responsibility to obey the law. It is clear that if she does not wish to follow the law, and cannot with a clear conscience or with a religious exemption that she can maintain, she must resign from her post.

It was not only the early Christians, martyrs such as Felicity and Perpetua, Polycarp and Ignatius, who were ready to oppose laws they could not follow, and thus die for their beliefs, but even Christians. today find themselves in these positions, even though martyrdom is not usually the result in the United States. One of the reasons you won’t find an Old Order Mennonite or member of the Amish community grappling with their conscience over whether to license a same-sex marriage as a county clerk is that he made the decision to retire a long time ago. government and electoral process to preserve their Christian integrity, just as the early Christians did in the first three centuries. Believing that there had to be a strict separation between state and church, they found the easiest way to maintain this complete separation by choosing not to participate in the political process or to seek elected office. While maintaining the authority of the state, for example in carrying the sword (Romans 13: 1-7), Mennonites and Amish consider the center of their community life to be the place of moral authority, punishment and reconciliation. As Paul writes in 1 Corinthians 5,

I wrote to you in my letter not to date sexually immoral people – not at all meaning the immoral ones of this world, or the greedy and thieves, or the idolaters, because then you would need to get out of the world. But now I am writing to you not to date anyone who bears the name of a sexually immoral or greedy brother or sister, or is an idolater, insultor, drunkard, or thief. Do not even eat with such. For what have I to do with judging those outside? Is it not those who are on the inside that you have to judge? God will judge those who are on the outside. “Cast out the wicked from among you” (1 Cor 5: 9-13).

Although it seems a radical position today, it was the position of the early church before Constantine. Most of us, however, certainly most Catholics, fit more into an Augustinian, or post-Constantine, position in which we participate in both the city of God and the city of men in a more meaningful way. formal, such as voting and seeking elected office. Then, of course, the laws of the world affect us in different ways and call us to engage in them in different ways. If Kim Davis has found a law that she cannot enact, and cannot do so even with a religious exemption, then she must heed her conscience and step aside from that role. It must serve God and not human beings. But neither can she oppose these laws as an elected official. Religious integrity calls on him to consider his own conscience, but not to dictate the conscience of others. They too have the right of their conscience.

Many commentators have taken this position, including biblical scholar Candida Moss, and I think it is the Christian position, as Kim Davis, freed from the burdens of her office, could then oppose the legislation if she chooses or rejects it in silence. Her conscience is hers and she must honor it.

Two others, however, claimed there were ways around his resignation. Bishop Pope, writing in the National Catholic Register, believes that the same-sex marriage law is not just an “unjust law” but “a despotic and shameful abuse” and so worthy of the civil disobedience of Kim Davis as a county clerk (he cites CCC, 1902-1903 to reach this conclusion). Elsewhere in his article, he quotes CCC, 2242, which I quote directly from his article:

â€œWhen citizens are under the oppression of a public authority which exceeds its competence, they must still not refuse to give or to do what is objectively demanded of them by the common good; but it is legitimate for them to defend their own rights and those of their fellow citizens against the abuse of this authority within the limits of natural law and the law of the Gospel.. (2242)

There are also times when civil disobedience is required of us. The Catechism says in the same place:

The citizen is bound in conscience not to follow the directives of the civil authorities when they are contrary to the requirements of the moral order, to the fundamental rights of the people or to the teachings of the Gospel. The refusal to obey civil authorities, when their demands are contrary to those of a righteous conscience, finds its justification in the distinction between serving God and serving the political community. “Give back therefore to Caesar what is Caesar’s, and to God what is God ‘s.” “We must obey God rather than men”: (2242)

There are two issues with his position, however, which I think still require that the result be that Kim Davis resign from his post if a satisfactory religious exemption cannot be found. First the Catechism say that, The citizen is bound in conscience not to follow the directives of the civil authorities when they are contrary to the requirements of the moral order, but no one is forced to marry a partner of the same sex. I have no need to follow this directive from the civil authorities if I choose not to. Peter and John chose not to follow the directives of the Sanhedrin. If, however, I am a member of that civil authority and am bound by my job or position to follow a directive contrary to moral order or natural law, the path of resignation presents itself as the best of times. It does not exclude civil disobedience; resignation is a form of civil disobedience.

Second, it seems to me that the question is whether the civil authorities exceeded their jurisdiction here, but if they did, when citizens are under the oppression of a public authority which exceeds its competence, they must still not refuse to give or do what is objectively required of them by the common good. What is the common good in this case for Kim Davis or the citizens of Rowan County? Is it to withhold marriage licenses from citizens or to perform the duty for which she was elected?

Eugene Volokh, writing in the Washington Post, discusses the particularly American legal and constitutional aspects of the Kim Davis case, apart from the Christian theological aspects. He notes that â€œsincere religious objections may indeed legally exempt you from doing some of your work – if the employer can exempt you without undue cost to himself, his other employees or his clients (recognizing that some cost is inevitable with any exemption request). He then applies this legal reality to what he calls “the Kim Davis controversy.”

The first point he makes is that â€œTitle VIIâ€, which authorizes religious exemptions, â€œexpressly excludes the electâ€. This points to a different reality for government officials. He adds, however, that “Kentucky, like about 20 other states, has a Restoration of Religious Freedom Act (RFRA) that requires government agencies to exempt religious objectors from generally applicable laws, unless the refusal of the exemption is the least restrictive. a means of serving a compelling government interest. It is certainly beyond my skills or knowledge as a Bible scholar, but Volokh mentions that such an exemption is what Kim Davis is looking for. He has updates on those exemptions that have allowed Kim Davis to be released from prison as long as his office, in one form or another, continues to issue marriage licenses to anyone who applies for them under the laws. applicable civilians, meaning both heterosexual and same-sex couples. â€œHowever,â€ writes Volokh, â€œwhatever Davis thinks of the federal judge’s order, she must comply or risk being jailed again (as of this update, she has just been released from prison) , although she is of course free to continue to appeal the order.

So maybe American civil law will allow her to come out of her religious position after all, but if not, her next act if she wishes to “obey God rather than any human authority” ( Acts 5:29) will follow the example of Peter and John – in general, obviously, not in particular – who were scourged and then ordered â€œnot to speak in the name of Jesusâ€ (Acts 5:40). Nevertheless, â€œthe apostles left the Sanhedrin, rejoicing because they had been deemed worthy to suffer disgrace for the Name. Day after day, in the courts of the temple and from house to house, they did not cease teaching and proclaiming the good news that Jesus is the Christ â€(Acts 5: 41-42). They did not, that is to say, joined the Sanhedrin – not that they could have done so – nor attempted to change the order of the Sanhedrin, but focused on their religious vocation. As the Gospels of Matthew and Luke say: â€œNo one can serve two masters; for a slave will either hate the one and love the other, or be devoted to the one and despise the other. You cannot serve God and wealth â€(Mt 6:24; cf. Lk 16:13). Sometimes conscience demands that if you can’t do your job, you quit your job, no matter what the cost.

Outdated rules on common-law marriage dragged through the courts