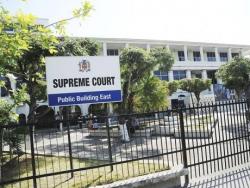 A St Andrew woman is seeking a court order to force police to remove her ill common-law partner who they removed from her home last week.

Robyn Patrick yesterday filed a complaint against Superintendent Aaron Fletcher of the Constant Spring Police Station and the Attorney General.

The lawsuit stems from the alleged forcible eviction of lawyer Henry Charles Johnson from his St Andrew home on August 6.

Two women claiming to be nurses also accompanied them.

Patrick said she asked the police if they had any court orders or a search warrant, but they said they had orders from their boss.

Johnson, who cannot speak due to a stroke he suffered in February last year, was then kicked out of bed, placed in a wheelchair and taken away.

His common-law partner does not know where he was taken and said she was concerned about his fragile physical and mental condition.

She said she has looked after Johnson since he fell ill, made sure he received medical treatment and provided him with emotional support.

Patrick said The gleaner that said since the incident, she has sleepless nights.

She also said Johnson still wanted her to take care of him.

â€œI feel so helpless and traumatized as a result of the incident,â€ she said.

Patrick, who was in tears, said that she and Johnson loved each other and all she wanted was to spend quality time taking care of him.

Lawyer Hugh Wildman who represents Patrick says he will seek an early date during the legal recess for the hearing of the claim.

Wildman also revealed that the matter was reported to the Independent Commission of Inquiry.